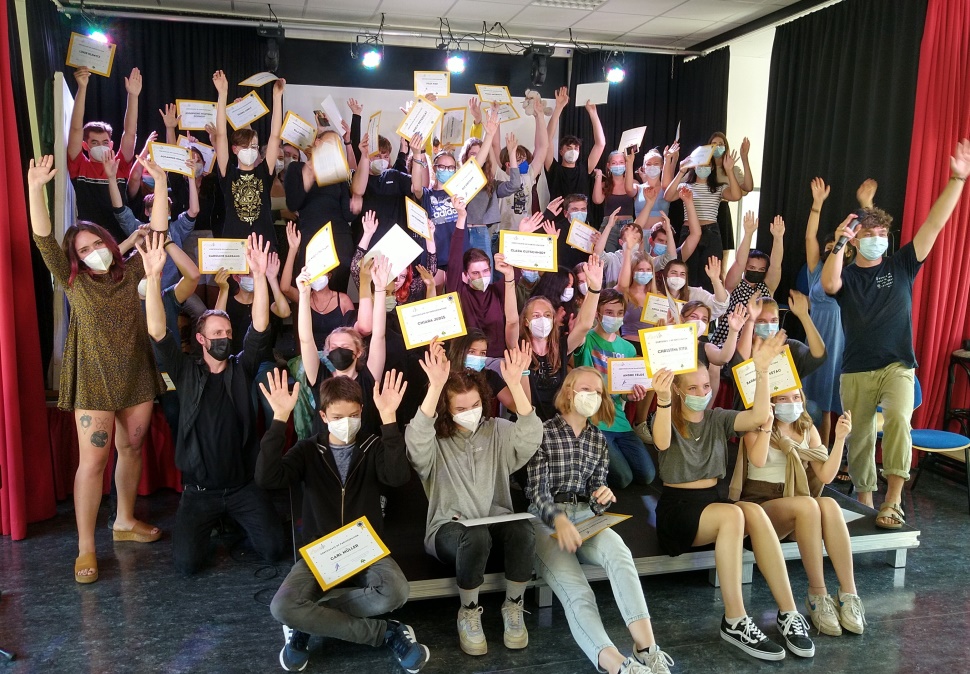 LEVEL UP: A week full of fun and inspiration to improve your English skills Reviews by Melanie and Chiara (10a)

The music workshop
In the English week 2021 I took part in the music project and at first I wasn’t really motivated to meet new people but when I met the teachers I was super excited for this week. We had two blocks with Felix and one block with Kaija every day and I think it was good to not have the same teacher the whole time because both are very different from each other and I could learn a lot from both of them. With Felix we sang some songs we presented to the other groups on the last day. With Kaija we did a project named “Humans of Berlin” (inspired by “Humans of New York”). With both of them we played many games to get to know each other like intergalactic samurai and wink murder which were also my favorites. I guess if someone asked me what my happiest or best memory is I would probably tell them about this week.
Thank you for giving us the chance to do this English week and learn so many new things.

The theatre workshop
Level Up was a very good experience. It was a very nice week with lots of fun. It was a different way to learn English and a big difference compared to regular English classes. There was no pressure and there were no great expectations. I did not feel shy to say something wrong in English or panicked if I did not understand something. It was no problem to make mistakes as you learn something from mistakes. The coaches were nice, kind and friendly. I understood them very well which I would not have thought. They gave me a lot of confidence.
I was in the theatre workshop which was a lot of fun. We did group exercises, funny exercises and embarrassing exercises. This was very good to overcome the inhibitions. It was also good to learn speaking without thinking. But acting was funny too. We had no texts or other things. We had a situation and did the rest spontaneously. That was the best way to become brave. Our coach was very nice. He is a theatre person which was cool. We had a lot of fun with him and learned not only English from him, but also acting. I think the other coaches are nice too. They were always friendly to everyone and were easy to understand. And if someone did not understand something, they repeated and explained it again. Theatre was the right workshop for me, but I would also have liked to take a look at the other workshops.
All in all I would say it was a very good week. This week was worth the money. I would do this week again. Speaking with a native speaker is a good experience and the best way to learn a language. I can recommend everyone to join Level Up and enjoy this week. This is definitely a fun way to learn and improve your English !

Here are some video clips from LevelUp2021: